It is with deep sadness and regret that we inform you of the death of Hilly Kristal, who died on

Tuesday, August 28, 2007, from complications from Lung Cancer. Kristal, 75, founded the

legendary rock club CBGB and ran the club for 33 years. A singer and songwriter himself, Kristal

opened the club to showcase "Country Bluegrass and Blues"; instead the club became a breeding

ground for Punk rock. Among the many acts that called CBGB home were Blondie, the Talking Heads,

Television, Living Color, Patti Smith and the Ramones. The club closed in October 2006, but CBGB

continues, with a retail store in New York City and worldwide merchandise sales; in addition, there

currently are plans to open new CBGB clubs in several locations.  Kristal is survived by his daughter,

Adam Burgman, CBGB, and the thousands of artists and musicians who played the club.  A private

memorial service is planned. A public memorial will be held at a later date. Contributions in Hilly's

Hilly Kristal LOST HIS BATTLE WITH CANCER ON AUGUST .28.2007 HE ONE OF ARE SAD STORYS OF SOME ONE LOST TO CANCER

LIKE NOY AND PETER AND MY DAD (DAVID .J.GARCIA ) HOW ALL PAST AWAY DEW TO CANCER  THEY WHERE

MEET THEME  THIS GUY WILL ROCK ON IN A BETTER PLACE NOW  R.I.P.  Hilly Kristal

http://www.cbgb.com/  TO HIS HOME PAGE 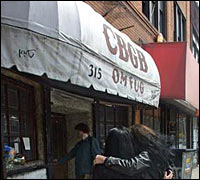 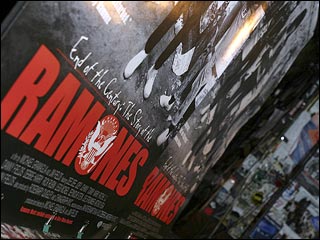 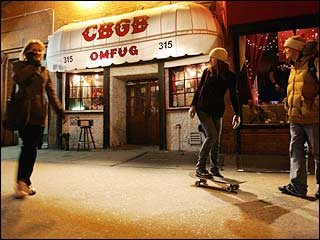 Clock Ticks Down for CBGB in Rent Dispute

Though CBGB, the landmark Bowery rock club he founded in 1973, is embroiled in a legal

dispute with its landlord and faces eviction at the end of the month when its lease expires,

there were signs, Mr. Kristal said, that an agreement would be reached soon.

"I think it's going to be settled amicably," he said by phone last week from his office at the

club, where, at 73, he still arrives early each morning and answers the phone with a quick,

But as Mr. Kristal discussed the situation, his attitude changed. He said he was certain that

his landlord - the nonprofit Bowery Residents' Committee, which aids about 8,000 homeless

people each year - "wants me out," and he soured on the prospects of a new lease.

Then he excused himself to go to a meeting where, Mr. Kristal said, he would discuss moving

"If doesn't want me," he said, "then I'll try to do something else. There are people

out there who do want me."

With 31 days left in its lease, CBGB's future remains uncertain, and though a motley group of

to help the club negotiate with its landlord, no agreement has been reached, and stomachs

have tightened all around.

Today, Steven Van Zandt, of the E Street Band and "The Sopranos," who has been leading

the celebrity volunteer effort to save the club, is to announce an Aug. 31 rally, planned for

. Depending on the success of a proposal that Mr. Van Zandt's team has

submitted to the committee on behalf of the club, the rally could be CBGB's last hurrah or the

start of its new life.

"This is the last rock 'n' roll symbol left," Mr. Van Zandt said. "We have seen one iconic rock 'n'

roll venue after the other disappear, and we finally said, 'Let's draw a line here, and save at least one.' "

If CBGB closes, it will join a number of downtown clubs that have shut down in the last several

years. This year and the Luna Lounge have closed because of development, and last year the

Four years ago the Bowery Residents' Committee sued CBGB for about $300,000 in unpaid rent,

which the club has been paying back, both sides say. But early this year the landlord, which has

313 Bowery to the club, found that CBGB owed an additional $75,000 because it had not been

paying the scheduled increases in its monthly rent, and the case landed back in court.

Mr. Kristal has said he did not pay the increases because he was never billed for them. The case

has been in since February; Judge Joan M. Kenney has not yet ruled. But

For Muzzy Rosenblatt, the executive director of the Bowery Residents' Committee, the matter

is simple: CBGB has a debt and it must be paid.

"I don't understand why," he said, "if they admit they owe it, they want to withhold money that

He estimated that the dispute, between the lost rent and the legal expenses over it as well as

a flurry of building violations, has cost the organization about $200,000, which "would put enough

outreach workers out on the street to help 100 homeless people every day."

The organization has an annual budget of about $32 million, mostly from government sources

and Medicaid; in its 18 locations around the city, CBGB is its only commercial tenant.

(An arts reporter for The Times, Julie Salamon, is the committee's chairwoman.)

when the committee withdrew from settlement discussions. Then a series of celebrities and

Among the first were the singer David Byrne and the filmmaker Jonathan Demme, who hoped

to arrange a meeting with both sides but found them unwilling.

"We said, 'Can we sit down and maybe both sides can compromise a bit,' " Mr. Byrne recalled.

"Both sides seemed to be open to that idea, but then some of them decided that they weren't

open anymore, that they would take their chances with the courts."

been able to pay the rent for decades." -- Reasoner

· "CBs has always kept its prices affordable for all music lovers, evolved to fill the needs of the music and

needs your help to keep its doors open." -- Burb Rocking

In June, Mr. Van Zandt said, he was recruited by a panicked Mr. Kristal to negotiate with Mr.

Rosenblatt. Mr. Van Zandt, who organized Artists United Against Apartheid in the mid-1980's

and was active in environmental and Native American campaigns, assembled a team.

After an initial meeting with Mr. Rosenblatt on June 20, Mr. Van Zandt and his team began to

put together a proposal that would meet Mr. Rosenblatt's demands. A new lease would have a

third-party guarantor and any outstanding building violations would be addressed. A foundation

would be set up to contribute $100,000 a year to the Bowery Residents' Committee, raised in

benefit concerts. A new lease, for 15 years, would include a modest rent increase.

The proposal was delivered to the organization last month, but Mr. Van Zandt said he had

not received an answer and had had difficulty communicating with Mr. Rosenblatt and his staff.

On Thursday evening, with a half-dozen associates gathered around him, Mr. Van Zandt sounded frustrated.

But Mr. Rosenblatt said he had not yet made a decision on the proposal, and said he was

Among his biggest concerns, he said, are a number of building violation notices the club received

in October 2003, during inspections that followed a fire that killed 100 people at a club.

was found to be too narrow.

Mr. Kristal and his representatives are adamant that the most serious faults were corrected immediately

and that they are working to correct the remaining violations. Mr. Rosenblatt said too many were still

The committee houses 175 people in the floors above the club; hundreds more pass through a

above the CBGB stage.

Mr. Rosenblatt, who said his first date with the woman who became his wife was to a concert

at CBGB, said he believed an agreement could still be reached.

"We believe," he said, "that people can change."