Los Angeles -- In 1998 artist David Gonzales had released the first set of his popular Chicano figures,

Homies, but by May 1999 his first set of 6 figures was receiving strong negative backlash about the

Chicano representations in his art. On the one hand there where those that thought his depictions of Chicanos

appreciated the art and the cultural representations of real people from the barrio. Gonzales states that the

figures are real people from his experiences, people from the community and people he grew up with. The

other criticism was that the original 6 Homies were gang related and promoted a violent lifestyle. Detective

(LA Times May 26, 1999)". There was also a deputy district attorney that stated that, "we're thinking of

putting them [Homies] in court to show people that if you are dressed like these guys, you' re violating

probation (www.lapdonline story entitled Homies Disappearing From a Store Near You)." The negative publicity

pull the Homies from the market, but was all the negative publicity towards Gonzales' figures correctly warranted?

individually in gum ball machines, on a blister card and as key chains. These are the characters that

where being associated as criminals, thugs and gangsters. The Los Angeles Police Department in May of 1999

examining the six figures individually. Each Homie has a bio that Gonzales wrote as part of the artwork

and Pre Columbian History. Mr. Raza also tries to educate the other Homies and encourage them to go to school

and become educated and work to change the system. Also SaPA(Frog)is just an ordinary homey from the

neighborhood that eats a lot of Mexican food and is not popular with the ladies. And even the most hard core

of the original 6 Homies, Mr. Loco works as a youth gang counselor and settles problems between rival gangs

in the barrio. Gonzales has stated in numerous interviews that he "did not create the Homies to glamorize gang

life" but many people will make false assumptions that Hispanic caricatures that are wearing baggy cloths, t-shirts,

and hats must be gang related, but the connections to gangs is a stretch which some consider quite ridiculous. 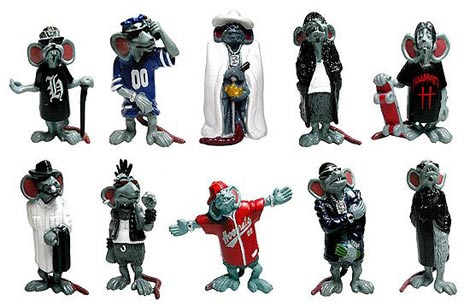 It is out of ignorance and prejudice that people come to these conclusions, but the Homies that have four

series now are becoming increasingly popular and are considered legitimate collector's items. Many stores that

had previously removed them have now reconsidered stocking them. Interest in these figures initially came from

the Hispanic community but now people from all over the world want to own their own Homies. Recent orders have

come from The J. Paul Getty Museum in Los Angeles, The Food Network and a costume company. Also there have

been several requests from many countries in Europe, Africa and South America and people in all 50 states have

It turns out that the early perceptions of the Homies were greatly exaggerated, and police officers and prosecutors

where a bit off the target when they associated these figures as gang-related. The release of Homies 2, 3, and 4 in

addition to Mijos 1, Mijos II, Mijos III have reinforced the original sentiments of Gonzales when he stated he was

creating art based on Chicano culture, not gang culture. The most recent releases include the Hoodrats and Psycho

Clowns and the Mini Bobble Heads. Some of these figures have also been made into dolls and are the most popular

MOST YOU MAY HAVE SEEN THIS PHOTO ON THE HOME PAGE OF BIG 8 AT IT'S BEST NEWS .COM HERE ARE SOME OF MY HOMIES THAT I HAVE BUY

NOW THAT YOU JUST SEEN SOME OF THEME. NOW YOU MAYBE WHAT SOME FOR YOU

HERE ARE SOME WEB SITES THAT YOU CAN BUY HOMIES AT

WEB SITE LINK'S WHERE CAN BUY THEME TOO HERE THAY ARE