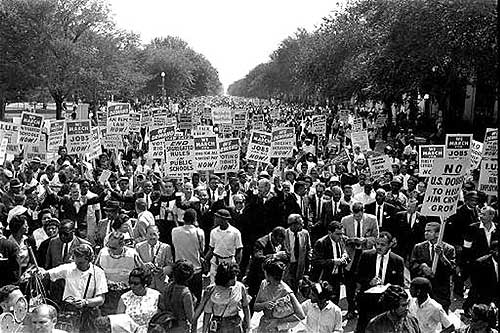 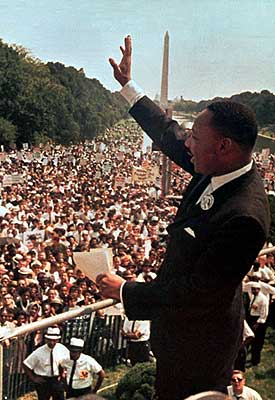 - Coretta Scott King, who turned a life shattered by her husband's

Flags at the were lowered to half-staff Tuesday morning.

"We appreciate the prayers and condolences from people across the country,"

The widow of the Rev. Martin Luther King Jr. suffered a serious stroke and heart attack in 2005.

because we have a chance to look at her and see what she did and who she was,"

because she did live, and she was ours. I mean African-Americans and white

Americans and Asians, Spanish-speaking - she belonged to us and that's a great thing."

Former Atlanta Mayor Andrew Young, the civil rights activist who is close to

the King family, broke the news on NBC's "Today" show: "I understand that she

and she was not able to and so she quietly slipped away. Her spirit will

remain with us just as her husband's has."

days of the American civil rights movement, and after his assassination in

, on , she kept his dream alive while also raising their four children.

observed as a national holiday, first celebrated in 1986.

King became a symbol, in her own right, of her husband's struggle for peace

and brotherhood, presiding with a quiet, steady, stoic

presence over seminars and conferences on global issues.

"She was truly the first lady of the human rights movement," the Rev.

Al Sharpton said in a statement. "The only thing worse

than losing her is if we never had her."

King also wrote a book, "My Life with Martin Luther King Jr.," and,

in 1969 founded the multimillion-dollar

for Nonviolent Social Change. She saw to it that the center became deeply

"The center enables us to go out and struggle against the

evils in our society," she often said.

She became increasingly outspoken against businesses such as film

makers she accused of promoting violence. She called for regulation of their advertising.

After her stroke, King missed the annual King Holiday celebration in

two weeks ago, but she did appear with her children at an awards

dinner a couple of days earlier, smiling from her wheelchair but not

speaking. The crowd gave her a standing ovation.

At the same time, the 's board of directors was considering

on grounds maintenance and more on King's message. Two of

the four children were strongly against such a move.

Coretta Scott was studying voice at the New England Conservatory

to Martin Luther King, a young Baptist minister studying at .

," King once said, adding with a laugh: "I wasn't interested in

meeting a young minister at that time."

She recalled that on their first date he told her: "You know, you have

everything I ever wanted in a woman. We ought to get married someday."

Eighteen months later - - they did, at her parents' home in

The couple moved to , where he became pastor of

the and organized the famed

bus boycott in 1955. With that campaign, King began

Over the years, King was with her husband in his finest hours. She was

at his side as he received the Nobel Peace Prize in 1964. She marched

triumphal climax to his drive for a voting rights law.

Only days after his death, she flew to with three of her

children to lead thousands marching in honor of her slain husband

and to plead for his cause."I think you rise to the occasion in a

crisis," she once said. "I think the Lord gives

you strength when you need it. God was using us - and now he's using me, too."

were highly visible in 1976 when former Georgia Gov. Jimmy Carter ran for president.

When an integration dispute at Carter's Plains church created a furor, King

campaigned at Carter's side the next day.She later was named by

Carter to serve as part of the delegation to the

United Nations, where the ambassador was Andrew Young.

In 1997, she spoke out in favor of a push to grant a trial for James Earl Ray,

who pleaded guilty to killing her husband and then recanted.

"Even if no new light is shed on the facts concerning my husband's assassination,

has run its course in this tragedy," she told a judge.

King was born , in Perry County, Ala. Her father ran a country

store. To help her family during the Depression, young Coretta picked cotton.

In 1994, King stepped down as head of the King Center, passing the job to son

Dexter, who in turn passed the job on to her other son, Martin III, in 2004. Dexter

continued to serve as the center's chief operating officer. Martin III also has

served on the () commission and as president of the Southern

Christian Leadership Conference, co founded by his father in 1957. Daughter

Yolanda became an actress and the youngest child, Bernice, became a Baptist minister.

On the 25th anniversary of her husband's death, , King said the

war in which her husband opposed "has been replaced by an

undeclared war on our central cities, a war being fought by gangs with guns for drugs."

"The value of life in our cities has become as cheap as the price of a gun," she said.

"In this country, we vigorously regulate the sale of medicine and severely

limit the advertising of cigarettes because of their effect on human health,"

she said , the 65th anniversary of her husband's birth. "But we

allow virtually anyone in to buy a gun and virtually everyone

in the nation to see graphic violence."

King received numerous honors for her self and traveled around the world in the process.

"Many despair at all the evil and unrest and disorder in the world today,"

she preached, "but I see a new social order and I see the dawn of a new day."

Coretta Scott King, known first as the wife of the Rev. Dr. Martin Luther King Jr., then as his

widow, then as an avid proselytizer for his vision of racial peace and nonviolent social

dream was also hers. "I didn't learn my commitment from Martin," she told an interviewer. "We just converged at a certain time."

'Eclectic' Hospital with a

, Jan. 31  The hospital in northwestern  where Coretta Scott King died advertises itself as "a truly wholistic health center" where people can find "a very eclectic approach to the treatment of chronic diseases, diseases by and large considered incurable by the orthodox medical profession."The center, Hospital Santa Mónica, was founded in 1983 by Kurt W. Dons Bach, a chiropractor and nutritionist who has been in legal trouble with state and federal authorities in the going back to the 1970's, said Dr. Stephen Barrett of , who heads an organization called Quack watch.A man who picked up the telephone at the hospital on Tuesday would not answer questions from a reporter, nor would he give his name. "We have no comment," he said.The hospital is on Santa Mónica beach in Rosarito, a resort town a few miles south of . On its Web site, the hospital says that "it feels more like a resort hotel than a hospital."The site includes a biography of Mr. Dons Bach that says he has "pioneered the use of hydrogen peroxide and ozone therapy in chronic degenerative diseases and is a leader in oxygen nutritional supplementation."Mr. Donsbach discusses accusations of quackery in a letter on the Web site."If a patient goes to an allopathic doctor for months or years and eventually is told, 'There is no more medicine can do for you,' and then that patient turns to an alternative practitioner who helps them and may even cure them  who is the quack?" he says in the letter. "Is the definition of quackery, one who practices a form of healing other than allopathic medicine? If this is so, I proudly proclaim myself a 'quack!' "The underlying causes of Mrs. King's death were listed as cerebral vascular disease and ovarian cancer, said Miguel Valdez, the head of the Civil Registry in Rosarito. Dr. Carlos Guerrero Tejada, who examined Mrs. King's body and signed her death certificate, works at another clinic, Hospital Santo Tomás that is connected with Hospital Santa Mónica. He defended the institution, saying Mr. Dons Bachs techniques had helped many people with health problems deemed incurable. "Definitely it's a very good option for patients with chronic degenerative problems," Dr. Tejada said

WEB SITE'S ABOUT THIS STORY